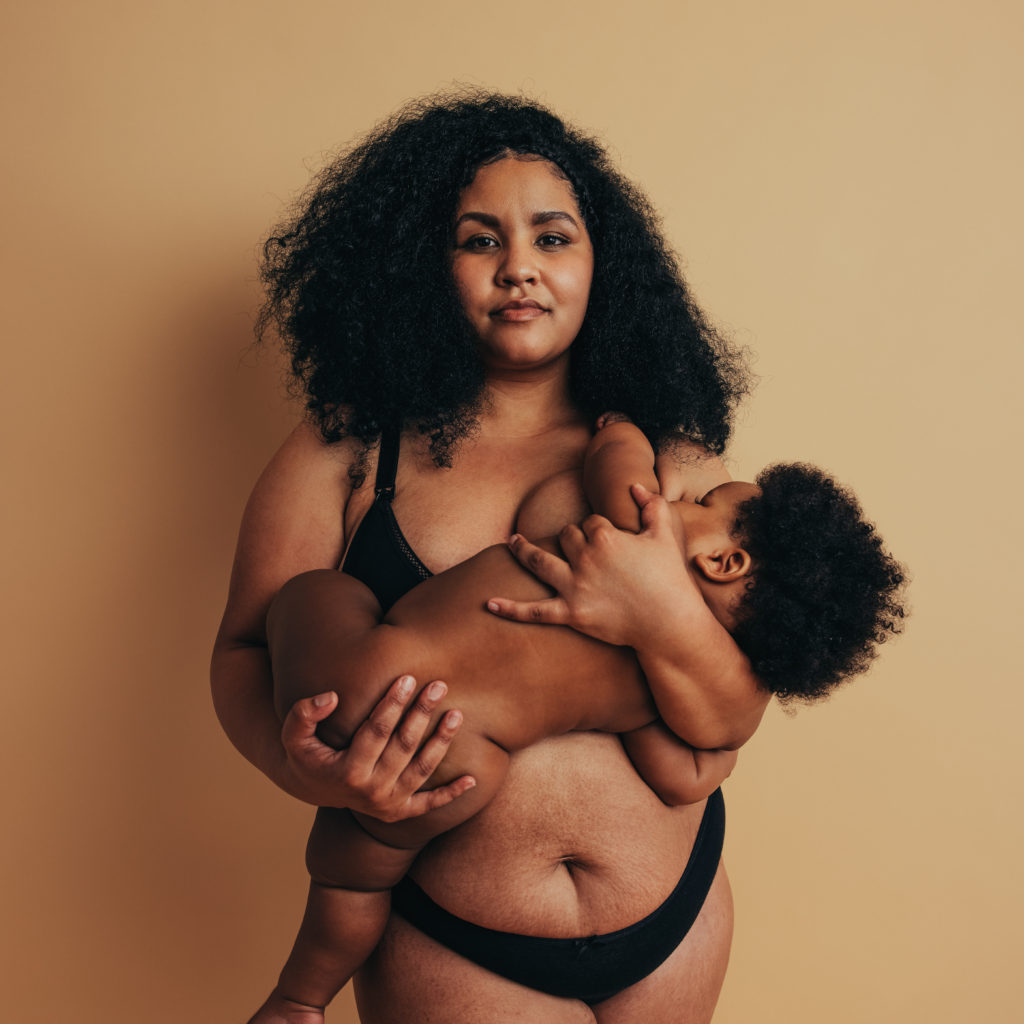 This is part two of a four-part series on how racism plays a role in pregnancy, postpartum, and infant health.

Human milk from a parent is unequivocally the best nutrition for infant. Therefore, breastfeeding is critical to the health of the child and, increasingly, research has shown the benefit to the breastfeeding parent (American Academy of Pediatrics, 2016).

According to Kimberly Seals Allers, expert breastfeeding advocate and author of “The Big Letdown”, the disparity is due to bias and racism. Research conducted by the Centers for Disease Control and Prevention (CDC) shows that hospital maternity wards “are less likely to help black women initiate breastfeeding after giving birth or offer lactation support following delivery” (Santhanam, 2019).  Hospital staff offer black babies formula more often than white babies (Santhanam, 2019), which can be one of the most important predictors of breastfeeding duration (McKinney et al., 2016). Beal et al. found that “African American women were less likely than white women to report having received breastfeeding advice from WIC [The Special Supplemental Nutrition Program for Women, Infants, and Children] counselors and, instead, were more likely to report having received formula-feeding advice” which is important given “WIC counselors may have a significant impact on African Americans’ and Hispanics’ decisions to breastfeed given that African American women (19.2%) and Hispanic women (39.2%) make up the largest minority proportion of the total population of WIC women” (Jones et al., 2015). The CDC cited studies that shows that black mothers “are more likely than others to need to return to work earlier than 12 weeks, and tend to be confronted with “inflexible work hours” that make consistently nursing and expressing milk difficult” (Santhanam, 2019).

In addition, there is often a lack of breastfeeding support and resources in black communities. According to Jones et al., “it is important to recognize the historical challenges that African American women have faced, which may have shaped perceptions and attitudes toward breastfeeding in the African American community and subsequently contributed to lower breastfeeding rates among these women” (2015). These challenges include systemic racism in institutions like healthcare and employment, the historical trauma inflicted by slavery and having black women serve as wet nurses for white women, and dealing with the stress of microaggressions that can have long term physiological effects on parents.

A variety of interventions may close the gap and improve overall breastfeeding rates, including educating and addressing healthcare providers on bias and racism as well as increasing breastfeeding support and resources by and for parents from each community. Formula companies could also be regulated to limit misinformation and conflict of interests. Finally, policy changes such as paid family leave could increase the opportunity for all parents to gain the benefits from breastfeeding.

About the author: India Olchefske, MPH, has a Master’s in Public Health from George Washington University and a Bachelor’s from the University of Chicago. Her graduate thesis focused on how the opioid epidemic affects rural pregnant women. She has worked at a variety of direct service, research and policy organizations with a focus on women’s and maternal health. She is currently pursuing a career as a ballet dancer in addition to public health.